Week Forty-two! After another interesting and productive conversation on the Beeminder discord, I’ve come to the (obvious) realization that edge-skating is bad! Take it from the test subject who has more than a dozen Beeminder goals that are set to derail daily.

My thinking previously for this was that, due to my akrasia putting things off until absolutely necessary, having things in the red is the only real way to push me to actually do them. If a goal has a yellow safety buffer of a day, then my monkeyweasel mind sees no reason to actually do it today instead of tomorrow.

In truth, this has worked really well for me so far, with only a handful of derailments all things considered. However, I am not infallible–what if something were to happen to me one fateful morning where I was totally incapacitated and wasn’t able to complete any of my daily tasks?

Would I want to reply to fifteen e-mails to call non-legit and make support fix and revert all those goals? Absolutely not, that would be a total nightmare for them! Instead I’d have to pay a hefty fine and manually fix all my goals myself–which would really just be a punishment solely for something bad happening to me.

The only sensible solution is to stop edge-skating. So, I’m going to slowly work up a buffer on all my goals, but that’s a lot easier said than done! 😱 @eugeniobruno had a great idea for pre-derails, which would make this solution a lot more enticing as well.

Anyways, in other news, I’m most likely going to be transition to a public Twitter and Instagram to better work on my digital marketing skills, as I plan to start a business soon (a minor announcement). I’m probably going to succumb and add a new Beeminder to track Facebook posts too along the same lines. It’d be great to expand to LinkedIn as well, but they deprecated their V1 API last March -eyeroll-.

Also, here’s a cute year-in-review from the Green Owl!: 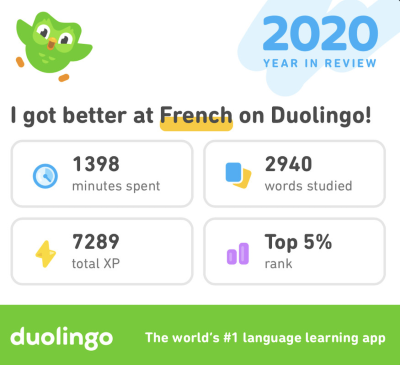 Not too bad, I’d say! Speaking of, Duolingo just added audio lessons (on my mobile app at least, yay for A/B testing?) and it’s been a real game changer. Not only do these new lessons really help with my pronunciation, they’re also a lot more enjoyable and faster to get through than their traditional lessons.